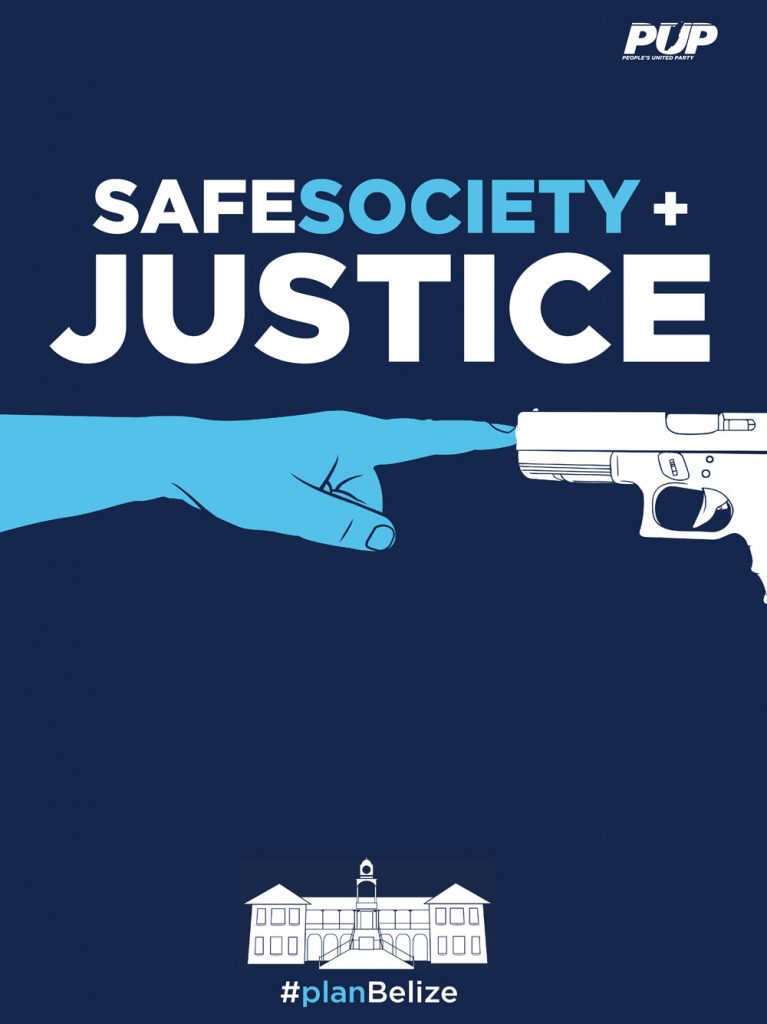 After almost thirteen years of surviving the hardships of poverty, low economic growth, citizen insecurity, and lack of public accountability, the people of Belize deserve a government that is responsive to their needs. The residents of Belize City and those of rural villages countrywide have turned to the People’s United Party (PUP) to restore social and economic resilience in their communities. They look forward to electing a PUP government that can bring solutions for economic prosperity, poverty elimination, citizen security and democratic governance and accountability.

The people of Belize are ready for change. This change is embodied in the four interrelated goals that will set Belize on the path to recovery. These goals are to be achieved over a ten-year period:

This is an area plagued with internal problems and low levels of public confidence. There are few immediate solutions but one year of intense and sustained actions moving in the right direction would make a huge difference.

Reform police recruiting and training. Add the incentive of totally free high school and 6th form for qualified and ambitious members of the Police Force after at least two years of exemplary service.
Reason: Attract a higher quality of recruit, boost morale and support continuing education.

Community policing program (vs. community relations). Networking villages to each district system to facilitate responses. This is a specialized area that will need trained personnel to manage effectively.
Reason: The Police cannot be everywhere, so citizens must be engaged and connected to a responsive force.

Separate and revise pay scale for law enforcement as an essential service.
Reason: Law enforcement is dangerous, taxing and there must be some incentive to reject corruption (i.e. resist bribes).

Establish a citizen’s concerns committee (civilians, law enforcement and bar association reps). It may be part of the Office of the Ombudsman. Citizens should not have to go directly to the ComPol or Minister to air grievances.
Reason: Public confidence and transparency.

The judiciary is under a great deal of stress. The percentage of the national budget allocated to this critical sector has remained around 1.3%, dipping to 0.97% in 2019. Over the last 20 years the number of Magistrates has increased from around 12 to 16. On average, each Magistrate disposes of 1,000 criminal cases alone each year. The Magistrates also handle civil matters including family and traffic cases.

The Supreme Court is plagued with retention issues based on the reliance on contracted foreign judges as opposed to tenured/career judges in the local system. The perception of political manipulation of the judiciary must be minimized by striving for real independence of the judicial branch of government.

INCREASE funding to the judiciary by 2% above the current portion of the national budget for human resources and infrastructure.
Reason: Courts are the main points of interaction between the public and the judiciary. The public perception and reliance (versus taking matters into their own hands) is key to good governance and security.

A review of data on current caseloads strongly indicates the need for more Magistrates. Increase the number of Magistrates in the Belize District by 3 and from the current 1 to 2 in each of the other districts.
Reason: Increase quality and timeliness of adjudication.

Public prosecutors in the Magistrate’s courts should be lawyers (not police). This should be a section of lawyers with responsibility to prosecute cases in the Magistrate’s courts. It would be equivalent to the public prosecutors in the Supreme Courts.
Reason: Police prosecutors are at a distinct disadvantaged when the criminal defendant has an attorney. This impacts not just cases heard by the Magistrate, but also serious cases heard for referral to the Supreme Court. While the public blames the private attorneys, it is the responsibility of the state/crown to competently present the case on behalf of the public.

The processes of selection and retention of Magistrates and judges need reform to attract quality legal talent domestically and regionally. Reconsider membership and composition of the Legal Services Commission (qualifications/criteria, tenure, staggered terms).
Reason: Re-establish reputation, quality and reliability of judiciary. Citizens must believe that the system is fair and equitable even when decisions are NOT in their favour.

Invest in a judicial complex (capital project) designed to accommodate multiple courts and the environment for legal and admin staff to support them. Trinidad/Tobago has the Hall of Justice – courts, registry, legal library, admin, media center & a judicial education institute.
Reason: Need to improve public access and efficient administration of justice.

Introduce night court. New legislation to create a limited jurisdiction Magistrate Court system that deals with issues requiring immediate action to avoid delays in justice and costly lock-up until regular business hours. The jurisdiction and services can be limited to requests for bail, paying traffic fines, child maintenance fines, summary jurisdiction in criminal matters of a less serious nature and in civil matters involving amounts not exceeding $1,000.00 (for example).
Reason: Increase public access to courts. Working people need access outside of regular business hours. The Bahamas is an example where they have night court from 6 to 8 pm.

Citizens should receive timely adjudication of civil disputes in the Magistrate’s courts. This is part of the recommendation for increasing the number of Magistrates. A dedicated civil Magistrate court could be considered.
Reason: Citizens must also feel that their property and money are secure. This is second only to physical security.

Attorney General should not be a politician or member of Senate. Person should be appointed by PM on the recommendation of the Legal Services Commission. There should be 1 Deputy for civil and 1 Deputy for criminal matters and they should be lawyers from the public service.
Reason: The role of the Attorney General is key to confidence and leadership in the judiciary and the role of this constitutionally independent branch of government generally.

The administration of justice in Belize continues to suffer from fundamental deficiencies which have perpetuated a manifest failure in the delivery of justice to the Belizean public. The failure occurs in both the civil and criminal divisions of the courts.

The Court system is operated with a view to validate, and by extension, perpetuate the exercise of executive power by the government rather than to serve as a check on power for the benefit of citizens.

Laws which are meant to protect the rights and improve the lives of the individual are in such an environment used to subject the population to the whims of a misguided government, all under the guise of the rule of law.

The importance of protecting the nationalization of the telephone and electric utility companies in Belize and to support government in its legal battles with the Ashcroft group, have arguably led to a perversion of judicial appointments and the ill effects of bad appointments continue to plague the administration of justice to the detriment of citizens, notwithstanding the settlement of those specific disputes.

The above assertion is readily supported by the number of the decisions of the courts situated in Belize that are eventually overturned by the Caribbean Court of Justice, particularly those in Ashcroft related cases. The claims by Ashcroft related entities almost invariably were lost before the Supreme Court and the Court of Appeal only to be won in the Caribbean Court of Justice once the arguments left our shores and were subjected to independent scrutiny. This anomaly may have well resulted, not from any misunderstanding or misapplication of the law by the lower courts, but from an eagerness on the part of the lower courts to serve the interests of government because of a lack of independence from government, whether real or perceived.

Albeit the rules of court have led to trials more quickly on the civil side they have not produced quality judgments in a timely way or sometimes any at all. On the criminal side delays persist in the trial of accused persons notwithstanding the introduction of case management rules. Delays in the trial of accused persons on remand are inordinate and indeed in violation of fundamental constitutional rights.

An emphasis on the introduction and application of rules of procedure to address the deficiencies has promoted a misguided notion of the importance of rules of procedure at the expense of judicial performance in delivering justice. The rules now appear to serve the interests of lawyers and the judges and not the public or accused persons.

The failures being experienced derive primarily from the appointment of judicial officers who rely on relationships with those in positions of influence to keep office rather than on the quality of performance of the duties of the office. This reflects a fundamental failure of the system of appointments to judicial office to make quality appointments. Quality appointments are key to a proper functioning of the system. Good people, after all, can make a bad system work just fine. Bad people, however, will ruin a perfectly good system.

The failures also reflect a lack of complete independence of the judiciary from the executive and a lack of accountability of those who hold judicial office to the public for the performance of their duties. They also to some extent a reflect a failure to offer competitive compensation in order to attract quality candidates to office.

Each of these failures are addressed below.

Independence of the Judiciary

The independence of the judiciary is often assessed by reference to the security of tenure of judges. While we have made strides in securing tenure for judges, the judiciary remains vulnerable to executive influence because its budget comes under and is controlled by the Attorney General’s Ministry. Pay raises, travel allowances and other perks are controlled by the Attorney General’s Ministry and/or the Ministry of Finance.

In order to strengthen judicial independence, it is necessary that the budget for the judiciary be allocated by parliament directly to the judiciary on the basis of a budget submitted directly to parliament for consideration by the Chief Justice. The funds of the Judiciary should constitute its own public fund separate from the Consolidated Revenue Fund and the fund should be managed by finance officers answerable to the Chief Justice.

There further needs to be independent periodic reviews of the salary structure for judicial officers in order to keep compensation packages competitive. The review commission should include the social partners and its report published to the public. Judges also need to be entitled to a pension from a pension fund separate and distinct from that for the public service.

The foregoing is intended to give effect to a new expanded organizational structure for the judiciary with the Chief Justice as its administrative head and specialist judges appointed to preside over specialist divisions of the court all of whom are to report to the Chief Justice. The Court of Appeal is to be brought under the administrative control of the Chief Justice and is to be divided into a Criminal and Civil side in order to more efficiently address the need for appeals. All registry functions, as quasi -judicial functions, are to be restored to the administrative control of the judiciary. And most importantly the Judiciary is to be financed from a public fund separate from the Consolidated Revenue Fund and funded directly by Parliament.

This new approach to the administration of justice in Belize will also require new physical infrastructure in every district representative of the importance of the rule of law in the country. The Courts should reflect their importance to society instead of treated as an insignificant afterthought.